The Netherlands is a constituent country of the Kingdom of the Netherlands, consisting of twelve provinces in Northwestern Europe and three islands in the Caribbean.The European part of the Netherlands borders the North Sea to the north and west, Belgium to the south, and Germany to the east, and shares maritime borders with Belgium, Germany and the United Kingdom.
That’s is hand-wrote in Japanese Kanji.
> example products 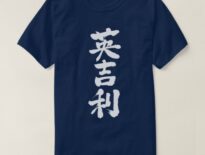