One of the color names. Generally, it is expressed as “white as snow”, but it is a color close to white, and snow is not pure “white”.
An object that uniformly reflects many wavelengths of light feels white. An achromatic color with a brightness of 8.5 or higher is called white. White gives people the impression of being natural, bright, nimble, light, static, beautiful, clear, simple, and elegant. Specific examples associated with white include walls, chalk, lab coats, hospitals, and teeth.
Japanese says “Shiro” “Haku”.
> example stuff 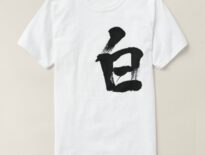