Japanese fencing. swordsmanship. Japanese says “Ken-Do”.
A traditional athletic culture that was born in Japan and inherited in Japan. Needless to say, the technical origin is a tactic that fights against the opponent with a sword, but as a culture with a wide range of purposes and forms such as training, self-defense, performing arts, physical education, sports, etc. It has developed and spread.
Please check it out! > example stuff 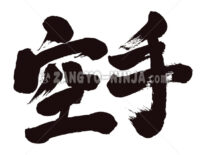